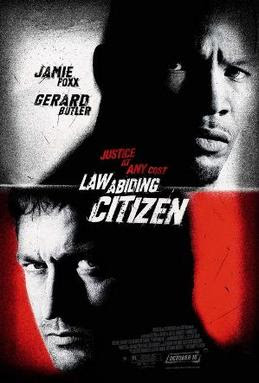 If you have seen Harry Brown, in which I might add, is almost identical to this film and is very good, then you know what to expect.

What makes it identical is the reasons and motivations as to why the lead characters take the law into their own hands.

Clyde Shelton (Gerard Butler) is an Engineer who lives with his wife and daughter.  His House gets broken into and while he tries to fend for himself and his family, he is gagged and tied up to watch his family perish before his eyes.
When the trial goes to court, he is taught that one of the murderers would not be convicted due to a problem with the forensics.  Angry, bitter, disgusted and emotionally torn up, Clyde Shelton takes the law into his own hands when he orchestrates the "vengeful" killings of both individuals responsible for his wife and child's death and anyone else remotely close to the case.

This film is a very good watch and not even 2 minutes into the film, the action starts straight away.  The pace is consistent and although you may feel you know what is going on, the twists and suspense in this film keeps you at the edge of your seat.
There are a few moments and scenes in this thriller that were surprising, such as the twists in the plot, but seeing how some people were dying in this film made you think of a very angry MacGuyver.
Gerard Butler's acting was excellent and to see him come from 300 to Gamer to now this, he is only choosing his roles very well and acting very well as well.
Jamie Foxx wasn't that bad in this film either.  I have seen him in better roles such as Soloist (If you haven't seen it, go and see it), but these are different films.

Dispite the fact that the reviews don't seem to be great for this film, in which I have read, this is a watchable and decent film.  Out this Friday.

I recommend this film indeed. A very good watch!