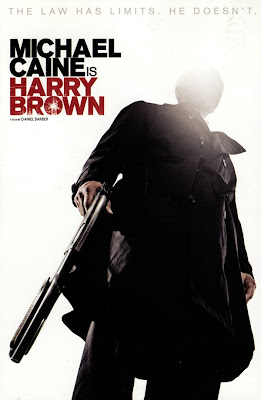 First and foremost, I understand that people do perceive this film as an old mercenary taking out guys/youths on his council estate as the police are too what-less to do anything.  I am under this impression because I have heard some views of what "they" have said about the film and to what they have shown on the TV.  Well, I will clear this up for you.

Harry Brown is a good film.  In fact, very good.  It stars Michael Caine as Harry Brown an old pensioner who looses his wife and then looses a dear friend to the streets of a Council Estate in South London where the youths are unruly and dangerous.  I like to call them ASBOs.  After the Police were confronted on numerous occasions about the ASBO youths but with no avail, Harry goes on a rampage by taking the law into his own hands and declares himself as the Council Estate Street Sweeper.

There are some disturbing parts in this film that attack your mind in two different ways.  The first way is, this is a thriller, expect some disturbing scenes.  Secondly, not only is this a thriller, the events in this film are actually that believable that it is actually disturbing to think that your next door neighbour is a crack/cocaine fiend and is shooting up or people are being killed on your council estate...and in fact, this is very much true to life.   Some truths can be unbearable, so walking out might be an option, however, if you stay, you will see some of the best acting I've seen from a young guy portraying a young guy.

Ben Drew aka Plan B (Rapper) who plays Noel, a street smart youth, heavily into the running of crime on the estate and also known by the coppers is the star of the show.  For me, his acting was flawless and real.  When you watch British films these days such as Lock Stock and Snatch, you don't get the same kind of realistic acting in these films compared to Harry Brown and Kidult/Adulthood.

To wrap this up, if you have not seen this film, I think you ought to get down to the Cinema ASAP and watch it.  I don't see why you would say it is not a good film at all.  The acting from both Michael Caine, Ben Drew & Emily Mortimer are good and the storyline and pacing is good as well.  If anything, this film is a good eye-opener and a good representation of what a Council Estate in London is really like.

Go watch the film, I recommend.  Out in the Cinema NOW!!!
Trailer: