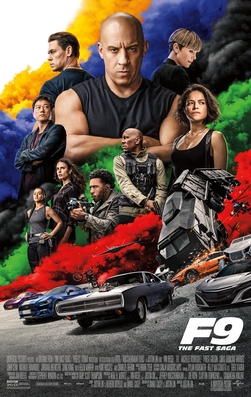 The Fast and the Furious franchise started in June 2001.  Considering this movie was meant to come out last year but the studio pushed it back a full year due to Covid-19, released May/June 2021, the 9th instalment marks 20 years of Dominic Toretto, the near, if not, superhuman character infamously known for his street racing and driving Fast & Furious stealing DVD's from the back of trucks in heists, to now taking on an Army of men, assassins, spies, you name it and coming out virtually unscathed with the gravelly mention of "Family" at some point during his speeches.  While the franchise was taking a dip until franchise viagra, Dwayne 'The Rock' Johnson stepped in, the franchise has leaned more and more into the craziness and absurd with nothing but big explosions, death-defying stunts and, well...Fast cars driving furiously.  Is this 9th instalment any good though? Ummm...I guess?

Dominic Toretto is living a quiet life with his...family, until he is interrupted by...family and is made aware of a distress call from Mr. Nobody, someone they used to work for.  Having investigated, Dom and...family are ambushed by a private Army led by none other than his own brother...family, leaving Dom and crew (I won't say family again) trying to stop Dom's brother from collecting all the pieces to a computer-controlled weapons device called Ares to stop, world domination?

Yeah, it's pretty much the same thing per instalment but wackier and wackier stunts.  The franchise itself is the Tom Cruise playing Ethan Hunt in every Mission Impossible film trying to outdo the last stunt and in this case, well...stunt or level of absurdity.  The plot is likely something they have done before except it is centred around Dom's Brother.  If you haven't seen the trailer, apologies for the tiny spoiler, but Deckard Shaw killed a member of Dom's crew (I tried hard not to say family there) and in this one, the person is alive and well.  There is a huge magnet involved for some reason and well, all the characters have plot armour soo thick, you are really watching for the action and the fun it brings knowing nobody will die, so there isn't any stakes.

Tyrese was always the butt of the joke in past movies to me, but I liked his character in this one as he made some real valid points about the crew and the missions they have been on.  Whilst seeing all the cast back, plus more from previous films and new ones, I just felt that not all good guys are good and not all bad guys are bad (something mentioned in the Loki series) and it just made me feel that Dom's crew will only get bigger and bigger and survive all the missions they go on.  I'm not looking forward to seeing someone eat it and die, but we need to bring back the stakes.  Maybe even, ground it a bit more and bring back more intense racing.  I understand this is essentially a children's film (if you really think about it) and I know Dom is the star, but he doesn't need to move like he is superhuman when he is far from super human...not even a broken arm, finger or a dislocated shoulder.  I know we saw Hobbs do that but so what? at least he was injured.

I've heard some rumours of more spin-offs, maybe a sequel to Hobbs & Shaw and possibly an all female movie, but at this rate, these films are becoming redundant.  There is only soo far they can go and by this movie, surely they have peaked.  As cool as the music is, the acting, the locations, the actors, the stunts, the fast cars, bulging muscles and explosions are, with no stakes and the increased absurdity, I feel the franchise will soon dip and spinoffs will not even help it.  It's funny and I did enjoy it for the movie it is, but maybe they should cap it here or at 10, not that rumoured 2-3 more movies.  You are as long as Star Wars now...stop it!