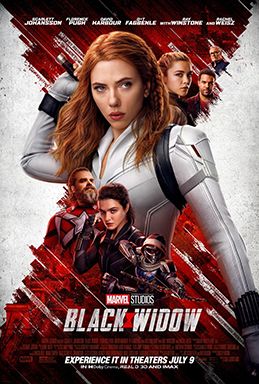 We are currently in a funny place with the MCU at the moment.  I say this because there has been a year with NO MCU movies, the second to last MCU movie, there were some seemingly prominent deaths and the last MCU movie showed us a bit of how life is or will be after the events of Endgame.
On another note, after the year gap AND the MCU now going into TV, MTU (maybe, working title), Disney has now released 3 TV shows connected to the MCU showing the continuation of the stories from our favourite and beloved characters after the events of Endgame.  So where does Black Widow sit within the timeline and having it arrive now, is it a healthy addition to the timeline? Should it have come out now after the events of Endgame? Is it a little too late? Do we even care anymore? Is it any good? Where does it leave the MCU now that it is out?  Soo many questions, soo many...but I guess I can try to answer them starting with, well, the film is good-ish.  I'll explain.

Black Widow picks up after the events of Captain America: Civil War, The Avengers are fractured after a fight and falling out and Natasha is on the run as a fugitive for violating the Sokovia Accords.  She seeks refuge at a safe house where she is met with some supplies, but shortly afterwards, she is attacked by Taskmaster which leaves her catapulted into a situation that involves her mother, father, sister and The Red Room, a training facility for Black Widows she long thought she took down and destroyed.  Natasha must now confront her past, her family and put an end to the Red Room, once and for all.

I believe this film is too late.  This film should have either came out before Endgame between Civil War and Infinity war where it takes place or come out in Phase 2.  There is a lot of politics and behind the scenes reasons as to why this did not happen, but I really do feel that the movie would have hit harder. The movie would have been more compelling and I feel it would have hit the audience harder.  I think more thought would have went into the movie.  It's not that Marvel haven't done a bit of back tracking before like Captain Marvel and at the time Captain America: The First Avenger, but I just felt the movie could have done a bit more with the story and some of the characters.  By all means, this is not a terrible film nor a bad film but I just felt a little underwhelmed although they did use it to set up the future or a few future characters in the MCU going forward.

It's Scarlett Johansson! She has been playing this role for over 10 years, she knows what she is doing and she is excellent as she IS Natasha Romanoff aka Black Widow at this point.  Everything about the character is second nature to her as she knows the character soo well that the characters around her need to be strong or stronger and thankfully, Natasha's family is strong.  The mother and the father are played very well by Rachel Weiss and David Harbour respectively, where the sister, played by Florence Pugh knocks it out of the park.  Two sisters who loved each other but grew apart and are somewhat estranged.  The acting is superb and there are no real complaints here, but the villain(s) are just not strong and one of the villains, in my eyes was terrible, similar to something the MCU has done before with one of their villains.  I won't say which film, due to spoilers, but I didn't like that direction at all.  We have come to the point where, people can fly, there are aliens, androids, wizards and super soldiers, so why couldn't this character be more comic book accurate? The story-arc, although I understood, just felt like a waste.

When I said earlier I that I feel they could have done more with the story had they given it proper thought, maybe they had, but since Avengers (Avengers 1 aka Avengers Assemble) when Budapest was mentioned, it would have been nice to have a substantial scene that tied more strongly to the comments made since Budapest kept being brought up.  Although I understand now having scene this movie, maybe a flashback scene would have worked better...show, don't tell.  Unless there are to be more Black Widow movies (and I do believe this CAN happen in between the Black Widow 1 and Endgame) this movie will as a stepping stone to how excellent a character Black Widow is, but if we have no more Natasha, then this movie will simple serve as a footnote to her character, although this film was good, it just wasn't great.  A nice watch but a little underwelming.  Remember when Natasha tells Steve about her "Bikini line" in The Winter Soldier? More epic adventures and encounters with many foes, but none of these are referenced and having such a great character as Natasha, it would have been nice to actually see that, this movie not withstanding.  Just nothing like Captain America: The Winter Soldier, something I had hoped for.

Unfortunately, due to Covid and people having anxiety to go out, Marvel need to be hitting us hard with their storytelling and their action for people to actually want to go to the cinema otherwise people will just wait for it to appear on Disney Plus.  Whilst that might not be a bad thing for some people, lifestyle and responsibilities etc, but if a film just looks ok, people won't feel inclined to make the effort to go to the cinema and as this film was meant to drop last year, maybe this film would have received the traction it could have got normally had it come out when it did due to the epicness that was Endgame, when now, it's simply watered down and lacking.  My final thought, bring back Scarlett and make a sequel that is somewhat a prequel and sequel to Black Widow, Creed it if you have to, but I feel more Natasha is needed and maybe if done correctly, we can have a stronger bond between these two specific characters due to their actions and the past, where the past catches up to the future in a more significant way.  Hawkeye will be cool, but give us something more.