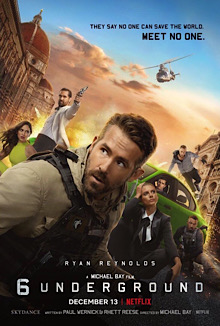 I have a love/hate relationship with Director Michael Bay.  I mean he is the man behind the original Bad Boys movie, Pain & Gain and a very small handful of great movies and a handful of very successful movies that print money that has no real story or plot, but helps catapult Michael to a position where he can make films like this.

To be fair, this is not a TERRIBLE movie, per say, because of actors like Ryan Reynolds, Ben Hardy and Corey Hawkins who hold the film up with decent dialogue on a substandard script and plot.  So for the most part, from what you get in the poster is exactly what you get in the movie, but if you were hoping for something very entertaining, funny, with a good storyline, heart and thought provoking, well...2 out of 5 is only 40% which is, not even passable, but then, you came to the wrong place.  Let me explain.

One (Ryan Reynolds) is a millionaire tech guy who has made millions from his work, but is now declared dead and now operates as a ghost.  A Ghost is someone who can operate anywhere at any time throughout the world to carry out vigilante operations no other teams can.  One is the leader of his team effectively called number one and he has 5 other people who are also known as numbers.  However, when his latest assignment involves the taking down of a dictator, the mission turns out to be more problematic than first thought.

The storyline is waste, if I'm honest.  You just don't care for it. There is no tension.  Just a hollow as hell movie.  However, the action, nothing but action on top of action on top of action and for the most part and that was the only thing I was interested in as it was violent, a little graphic but with cheap gore, blood spilling everywhere and crazy deaths.  Some of the dialogue was great with possibly loads of improvisation from Reynolds as he is definitely the stand out. His character reminded me of the character from The Hitman's Bodyguard and Blade Trinity.

The movie is loud.  The movie is high-octane action.  The movie is very stunning with amazing shots and beautiful locations with very stylised action and cinematography and wardrobe.  It was practically Transformers but with actual humans and no robots as the vibrant colours seemed too bright for modern day life.  Like "who wears that going out?", but the ever so flamboyant Michael and his nonsensical decisions and outlandish slow-motion shots and 360 pans, almost upskirt angled shots.  For the most part, some of these, maybe one or two could be nice, but when it is relentlessly throughout a movie and then to add the unnecessary explosions to it, it just becomes...waste, really.  Like what is the point.  The Fast and Furious Franchise does Michael Bay better than, Michael Bay.  But if this is your thing, go for it.

I wouldn't go cinema for this, I'm glad it's on Netflix.