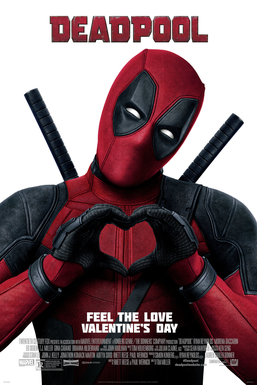 Deadpool. What the hell is a Deadpool? Well the answer to that is actually explained in the film.  I'm not 100% if this is correct to the comic book universe which has been retconned over the many years after the character was conceived, but like Deadpool, he derives from the Marvel comic book universe and is a genetically modified person.  Think of Captain America.  Think of Wolverine's adamantium covered bones and healing factor.  Think Spider-Man (A character they modelled Deadpool off of fusing him with Deadshot from DC. Comics).  The point I am trying to make here is that, Deadpool is an experiment and not necessarily a Mutant although he has the Mutant healing ability Wolverine has as he was also a part of the Weapon X program Wolverine was subjected to.  A point that was slightly/briefly covered in the terrible film, X-Men Origin: Wolverine, a film that brought us Deadpool as Wade Wilson and completely butchered his character and appearance.  This film basically gives you a better and more correct telling of Wade Wilson, the merc with a mouth who is a completely self-aware character and how he becomes Deadpool.

Wade Wilson (Ryan Reynolds) is a Mercenary.  He will kill people for money and he has no problems with that.  A bit of an arsehole and a bit crazy (messed up in the head), he eventually meets a woman who he then falls in love with, Vanessa (Morena Baccarin).  Whilst in this relationship, Wade is diagnosed with terminal cancer which forces him to leave her to seek treatment at the hands of Francis/Ajax (Ed Skrein).  However, as the deal does not pan out to be exactly how it was initially intended, Wade must now correct the outcome of the experiment and save his girlfriend at the same time.  To add to Wade's troubles, both Colossus (Stefan Kapičić) and Negasonic Teenage Warhead (Brianna Hildebrand) join him on his quest.

First of all, this is a hilarious movie.  Maybe for some of you, some of the jokes may not hit, but there are soo many jokes throughout this film, you'd be forgiven if you thought this film was a comedy.  To be precise, this film is a revenge movie infused with a love story.  About a man trying to get his girl.  But as well as being a revenge story, a superhero comic book movie as well as one, NOT FOR KIDS, this film is firing on all cylinders.  If you have seen the marketing, the lewd/sexual jokes and the violence (including blood) in the trailers, this film basically spells out ADULT in every single way possible.  This is a character for adults with adult themes, although a superhero movie.  You will see the contrasts of his character and the X-Men characters when you watch the film which makes the movie work soo well.  Another element to this movie that makes the movie work soo well is that, Wade is a very self-aware character.  In the comics, he is THE ONLY CHARACTER in comic book history (I think), who knows he is in a comic book.  He would often approach subject matters outside of comic book lure and also address his readers.  This film does the same thing.  They stick soo close to the comics with this, the results are hilarious.  Poking fun and making jokes about anything and EVERYTHING! Blink and you will miss it, but there is a moment #Spoilers (I guess), that Deadpool actually moves the camera for the audience and at times he would randomly address the audience where the other characters won't have the foggiest of whom he is talking to.

Brilliantly executed by director Tim Miller and excellent acted by Ryan Reynolds.  With other actors doing a great job such as the main villain Ajax, his "sidekick"/Bodyguard Angeldust (Gina Carano), this film is bound to entertain.  The fact that they made this film for $58m dollars, which sounds like a lot, but in comic book movie standards is, peanuts, this film does not come off as sloppy, badly edited nor cheaply made.  I guess there is an argument to made in regards to a few shots but...$58 million? X-Men Origins Wolverine was made for $150m and the last X-Men film, Days of Future Past was made for $200m. How is that for context?

Have a watch, i'm sure you will love it.