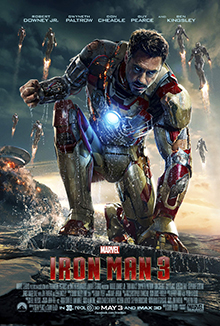 Most people love technology and flashy hi-tech stuff. Moreover, having an Iron Man suit is something you are likely to put on your Christmas wish-list. I mean, who wouldn't want to shoot energy proton lasers from their chest or hands? Better yet, running late for work? Suit-Up and fly to work. With invincible armor, you can do almost anything you like, right? Well, sort of, but it doesn't stop you from being human.

Tony Stark (Robert Downey, Jr.) has endured a lot of things. Since becoming Iron Man, his life has become more important and at the same time, even more at risk. There are bad guys everywhere who want a piece of that armor or a least some kind of armor which works just the same. Obadiah Stane with the Iron Monger suit. Ivan Vanko as Whiplash with his energy powered "whips". And with almost losing his life, again, after aliens attack New York, Tony Stark is left in a state or shock and restlessness. I mean, from someone being someone who is super intelligent, one of quite a bit, to having a armor powered suit which renders him invincible, to fighting and trying to save the planet from an alien takeover/war with a Norse GOD, a Super Soldier who was frozen in captivity and a man who can double in size, strength, leap huge distances and turn green, Tony doesn't sit well with this at all and has been finding this hard to adjust to. It is a lot, if you think about it.

This time around though, we have Aldrich Killian (Guy Pearce), a disabled Scientist who works with Maya Hansen, the inventor of Extremis, who at a New Years Eve Party in 1999, is celebrating with Tony and Killian where Killian offers Tony a job with Advanced Idea Mechanics. Tony turns the job down and years later, Killian is a successful business man in science.

However, The Mandarin emerges causing terror, with threats, jammed public broadcasting and a string of bombings everywhere which leaves Tony's pal and security chief Happy Hogan in hospital. At this point, this is the last straw for Tony who leaves the Mandarin a televised threat in which the Mandarin excepts the invitation by bombing Starks Mansion. Presumed dead and far away from home, Tony must uncover the truth about the Mandarin, the bombings and a possible love interest in Killian to Pepper Potts as he has been driving her away with his recent behaviour.

I think I was expecting too much from this film as I felt it could have been better. But with that said, remembering how the film played out, the acting, the plot, the twists, the technology and the action; this film does everything the second film doesn't and keeps the film a little bit more grounded and closer to the first Iron Man film. Not to say, in my opinion of course that Iron Man 2 wasn't good as I liked it, but Iron Man 3 excels where Iron Man 2 doesn't. The film is darker, funnier and has a more humane feel to it. The Iron Man suits are always great to see and in action, especially when 6 - 7 and then some, fly to Tony's aid in the final scenes with the bad guy. Even War Machine aka The Iron Patriot has a bigger role in this film than the previous films and added a little bit of that buddy on buddy back to back fighting Iron Man 2 left us with.

If you enjoyed the previous films, this one will be no different.