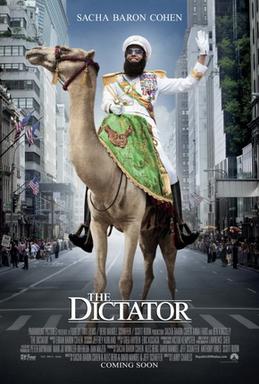 I'm not sure what to make of this. I mean, I like Sacha as I do find him funny. In fact, he is very clever. Well, considering that he went to the University of Cambridge and read about history at Christs College, he manages to subtlely or sometimes blatantly highlight current issues with the world with "hidden" or not so hidden messages. I love it when he does this. However, this film?

I first caught onto his comedy when he was on the 11 O'Clock Show and he often displayed a few of his different characters, Ali G, Borat and also Bruno. There has also been a film called Ali G, a film called Borat (also reviewed here) and also a film called Bruno, but in terms of the level of homour, in my own personal opinion, Borat has always been my favourite. The film Borat to me, was the funniest of all his films. Outrageously funny, stupidly dumb/funny and generally one of if not, the best barrel of laughs I've ever had from a film. With that said, every film Sacha will do after this film will need to come harder and be much better or be exactly the same. However, Bruno, in my opinion didn't come close, although it was as funny as hell.

The Dictator is about a notorious dictator named Admiral General Hafez Aladeen (Sacha Baron Cohen), a childish, lecherous, anti-western and antisemitic despot who surrounds himself with female bodyguards, who  refuses to allow Wadiyan oil to be sold internationally and is working on developing nuclear weapons. However, after the United Nations Security Council resolves to intervene militarily, Aladeen travels to the UN Headquarters in New York City to address the council but is kidnapped so that a body double would carry out the signing of a document democratizing Wadiya. Admiral General Hafez Aladeen escapes captivity after having his beard shaved off and then, practically unrecognisable, tries his best to get back to where his unit are at a hotel to then sabotage the signing with the help of Zoey (Anna Farris) a short haired female he meets along the way and an old scientist he used to work with .

The Dictator to me was like watching Ali G, ut as this was a while ago, more close to Bruno. I don't know what it is, but in my own personal opinion and i will keep saying this, Borat was the best of Sacha's characters. Although The Dictator is NOT one of Sacha's characters, The Dictator seems to combine all of his characters combined in some sort of way (possibly the comedic value offered) but the film doesn't necessarily deliver the same or even better comedic intelligence than Borat. It is very possible that I will continue to compare his films to Borat, so some may find this film excellent, good or even have mixed reviews like myself, but I honestly don't think this film is at Borat's level, nor do I believe anyone could argue and say that this IS better than Borat.

This could well be due to the nature of the comedy and the jokes. I'm not completely slatering this film, as it is very funny in places, but that's just it. Better than Ali G but not Better than Borat, nonetheless, a good laugh.