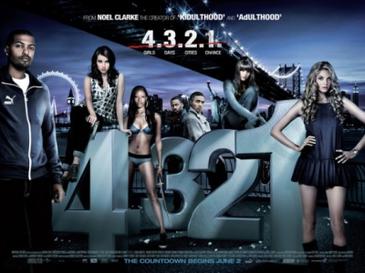 Now if you know who Noel Clarke is, well he is a bit of a grinder. I say this because it is only now that I have seen him on THIS grind to be as far as to where he is now. Not only has he been in TV Shows such as The Bill, Casualty, Doctors and even Doctor who, he is also getting around in film. Smart guy (unless he was born with lots of money), saved the funds and made a very iconic and memorable film called Kidulthood in which he wrote. After the success of that, Adulthood in which he wrote, directed and produced and he has basically been on a role hopping in and out of directing, co-directing, writing and acting in many films. However, this isn't about him, this is about his film he wrote, co-produced and co-directed.

If you have seen Vantage point then you will understand how this film goes. Like Vantage point, this is one story, but instead of spiralling around 7 people; only around 4. 7 was bad....it got long winded. Anyway, so the story begins with Joanne (Emma Roberts) feels that she can't get a break. She is chained down in a dead end supermarket job while her friends are all out having fun and doing exciting things. Her friend Cassandra has been talking to a guy over the internet and is getting ready to jet off to New York to meet her "Internet" boyfriend. Another friend, Kerrys is a no-holds barred one woman army on a female crusade fighting for female liberation and Shannon plays the leading role who is a girl who lives with her separated dad and has a lot of problems of her own. The craziness erupts when Diamond thieves sends their separate worlds on a collision course with not only each other, but fate itself. Not only do these 4 girls have to deal with their own problems they are about to have 3 days to discover the truth behind their problems spanning 2 cities and for all of them, around one central problem starter, The Diamonds.

The film is watchable and not only is it consistent, it does keep you intrigued as to how different these four girls lives are and what they get up to in their spare time. Sometimes you can judge a book by it's cover and often in society if not all the time, people do this, but only if people knew what the other person was going through and we often took the time to listen to each other and read between the lines, we could solve a lot of problems before it is too late. This film touches on that in a nice way as every girl has an issue at home and is something that all teenagers and adults alike can relate to. The fact that rapper Eve was in this film did knock me for 6 when I saw her, but her role wasn't that important, more interesting if anything but then that WAS the general idea with the film. A lot of things happen behind closed doors or over the internet behind screen monitors. Trust me, it might have been funny to watch in this film, but have you seen Gamer, with Gerald Butler?

Not a film you will feel was the best watch of your life, the year or even a minute so maybe not even a DVD purchase, but if you want a close to reality English drama, this would be right there in the ranks of Kidulthood and Adulthood. Interesting, decent acting, realistic although a touch outlandish but worthy to put in that collection of yours. Go see it.